Since the turn of the 19th and 20th centuries, Jacek Malczewski's works have been one of the most sought-after collectors' rarities. As in the past, the paintings by the Vicious Circle's author continue to constitute the core of the most outstanding private collections in Poland. In the last thirty years, the history of the Polish art market has been continuously witnessing discoveries of the master's unknown paintings as well as record-breaking auctions of the works by the greatest painter of Polish symbolism. In recent years, DESA Unicum auction house has had the honor of presenting such outstanding and rare pieces as the Nativity Play (1888), Orpheus and Eurydice (1914), and Spring (1914). In 2021, the discovery of the lost Stanisław Witkiewicz's Portrait (1902), painted by Malczewski on the terrace of the "Pod Jedlami" Villa in Zakopane, turned out to be a real sensation.

Found at the turn of 2021 and 2022, the work Reality (1908) is one of Malczewski's greatest paintings. The large work presenting a Baroque composition touches on the most important themes that bothered Malczewski throughout his artistic career: the artist's mission, the patriotic mission of art, as well as romantic and national myths. The figure of the court jester of Polish kings, Stańczyk, whom Malczewski antithetically juxtaposed with his self-portrait, places Reality on par with the outstanding Stańczyk by Jan Matejko (1862, National Museum in Warsaw) and the Stańczyk by Leon Wyczółkowski (1898, National Museum in Krakow). This work of tremendous significance for Polish culture was last exhibited in public in 1926.

Today, we have the honor to show Reality to viewers and, at the same time, present you with a publication of articles by renowned museologists and art historians who are thoroughly analyzing this multithreaded masterpiece by Jacek Malczewski.

Chairman of the Board of DESA Unicum

The item has got an import license of country of EU.

oil/canvas, 115 x 209 cm
signed and dated along the canvas' edge upper left: 'J Malczewski 1908'
another historical titles: Polskie Jasełka, Stańczyk
The item has got an import license of country of EU.
ID: 125617 Unknown to the Polish audience for many decades, the work by Jacek Malczewski, referred to in pre-war literature as "Reality," remained buried in the Polish-German family collection. The discovery of the paintings at the turn of 2021 and 2022 has been a significant event for Polish art history. This work is a crucial element in the cycle of the most important symbolic, multifaceted pieces by the painter, such as "Melancholy" or "Vicious Circle," in which he refers to the issue of the artist's vocation.

Until today, its existence was evidenced by a black-and-white photograph taken by Amalia Krieger, a Krakow photographer, who documented the paintings in Malczewski's studio at the beginning of the 20th century. Soon after being painted, that is as early as in 1908, "Reality" was exhibited both in the Krakow and Lviv Society of Friends of Fine Arts. Contemporary art critics noticed the hermetic, symbolic message of the composition, as well as its artistic brilliance:

"The painting "Reality" is indeed a powerful, symbolic vision, a wonderful composition, in which the author of "Death of Ellenai" returned to his beloved idea of symbolic representation of Poland's post-partition history. In the huge canvas, we, once again, see crowded martyrs of the nation, warriors for independence from three historical periods, grey-haired old men in their prime, and young men with faces frozen in pain, all marching in one line. Matejko's 'Stańczyk,' the court jester, seats in front of them with a caduceus in his hands, eyeing these representatives of the nation's armed insurrections who lost their way with deep compassion. The very author of the painting leans from the side of the composition, with his face focused, exhibiting prophetic seership. The incredibly colorful piece can boast first-class painting qualities, the finest draft, curious vividness, and expression; the technique displays all the signs of versatile brilliance in dealing with paint, characteristic of Jacek Malczewski's brush."

The importance of this composition and how representative it is for the painter's oeuvre is evidenced by the fact that the painting was reproduced in the album of Malczewski's works published by the Polish Painters' Salon in Krakow in 1910, with the illustration being complimented by a versed commentary by Lucjan Rydel. In 1914, the picture was published in "Tygodnik Ilustrowany" magazine, and in 1926, the work was presented at the artist's jubilee exhibition at the Lviv Society of Friends of Fine Arts. Published by Rafał Malczewski, the album in the collections of the Józef A. and Andrzej S. Załuscy Municipal Public Library in Radom featured a reproduction of the painting entitled "Stańczyk.".

"Reality" by Jacek Malczewski is now presented for public for the first time since 1926. 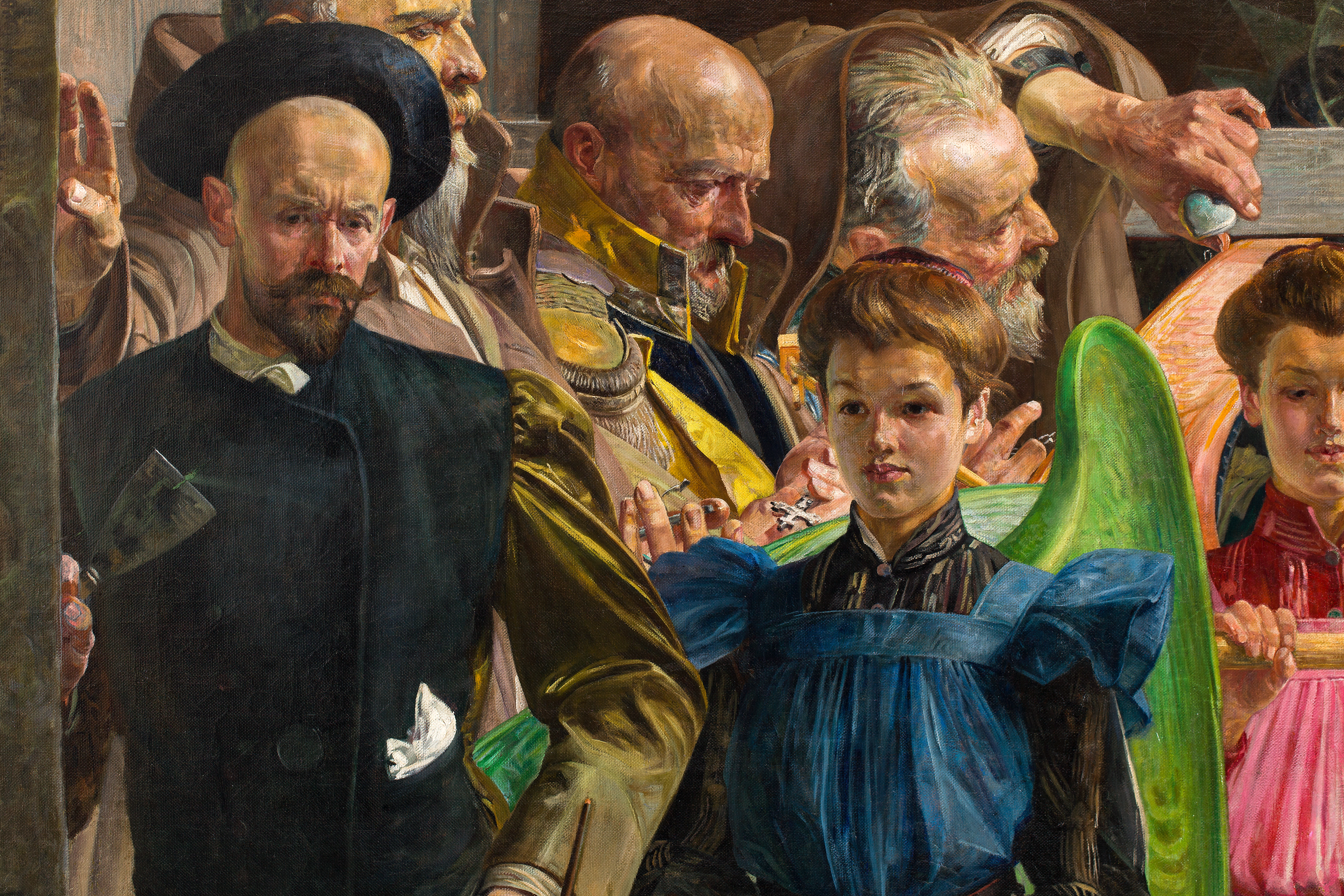 Similar to "Melancholy" (1890-94, Raczyńscy Fundation at the National Museum in Poznań), in "Reality" the multifaceted scene emerges from, or is reflected in, the painting support, which is placed in the composition as a manifestation of the painting's proper subject. This subject is the supersensual and psychological reality of the painter – the world of his inspirations emerging from the romantic worldview, deep religiosity, and patriotic myths. Their intricate nature in "Reality" encouraged the first critics of the painting to consider the piece in the categories of the artistic universe and to refer to it as "the whole world" (Kazimierz Błeszyński, Ze sztuki. Wystawa Przyjaciół Sztuk Pięknych w Krakowie, "Nowa Gazeta" 1908, R. III, No. 337, p. 2).

The complicated message of "Reality" comes from a surprising juxtaposition of multiple symbolic and historical orders. In the work, the painter combines religious themes, elements related to the history of Poland, and motifs from his own everyday life. The fusion of the past and the present, peculiar to the iconography of Malczewski's key works, is a pattern inherited from Matejko's painting style. In the work of this artist, who was also Malczewski's teacher, historical events were analyzed and reconsidered through the prism of their impact on later history. In his well-known paintings, Matejko did not render the historical events faithfully; these visions had more in common with the philosophy of history, creating a narrative on the historical fall of Poland and constituting a commentary on the contemporary political situation of the country.

The heroes of "Reality" are drawn from a variety of historical eras. The artist is a representation of the present day on the canvas. Fifty-four-year-old Malczewski portrayed himself in a painting in a black vest, a hat, and painting tools. His pose, suspended in movement with eyes staring into the ground, issues from the inevitably emerging painting vision. The artist touches the edge of the canvas with his hand, thus emphasizing the visibility of the artistic creation that extends behind his back. Metaphorically, we see the painter's green signature on the support painted on the canvas.

Antithetically, in the second part of the painting, he placed the figure of Stańczyk in a scarlet jester costume. This historical figure from 16th-century Poland explicitly refers to Matejko's critical narrative on the cause of the country's fall. Three old men in greatcoats and uniforms in the background of the composition symbolize the country's nineteenth-century insurgent past. Malczewski engages in a peculiar dialogue with the tradition of European painting while addressing the subject of national tradition in "Reality." The piece is a personal interpretation of the well-known theme of the adoration of the shepherds, whose role is played by the Poles who had been relocated to Siberia. Malczewski set the scene in a crib with the newborn Christ and Mother of God, whose figures emerge from the darkness from behind the panels on the back of the composition. Since the early period of his artistic career, Malczewski had painted nativity scenes several times (“Nativity Scene,” 1888, private collection) and, following the example of 19th-century Polish Christmas mystery plays, refreshed them with national themes. As in "Reality," Poland's past and present of the enslaved state slowly loom over the religious order in these works.

Malczewski modeled the characters of his painting drama after people dear to him. There is a parallel between the Holy Family and the Malczewski clan. The physiognomy of the model from Malczewski's previous work made a year earlier confirms that the angels' faces resemble the artist's daughter, Julia. The Mother of God and Christ are in fact the wife of the artist, Maria, and the son, Rafał. The depictions of the artist's family in "Reality" are inconsistent with the time when the painting was made. Malczewski here revisits his daughter and son's early years, creating an idealized portrayal of symbolic heroes based on his close ones rather than a record accurate to the time the work was painted.

The few last years have brought impressive records for the outstanding works of creators from all periods. Jacek Malczewski's "Reality" is not only a noteworthy depiction of the modernist Young Poland era but also a significant contribution to Polish culture.

See the artwork of the greatest Polish and international artists ever, available now at DESA Unicum.

Dancer with the finger on the chin (“Danzatrice col dito al mento”), 1806-15
Archiwalne

"One night Velazquez's Infanta came into my room" from the series "There is nothing next", 1988
Archiwalne