Rings have always been one of the most popular types of jewelry, and women od ancient Egypt were always eager to decorate their bodies with them. They wore them not only on their hands, but also on their toes. Various types of rings have numerous symbolic meanings. One example might be signet rings engraved with family coats of arms, which are associated with the high social status of their owner. Wedding rings have become a symbol of love and a wedding promise, that tradition originated in ancient Rome. Golden rings, serve as signs of the office held, and were available only to persons holding the highest offices in the state. Casual citizens had to settle for iron.

The dynamic development of goldsmithing took place in the 16th and 17th centuries. At that time professionals began using stencils. These were books with illustrations of the most fashionable designs of jewelery products at that time, thanks to which jewelery was produced throughout Europe in a similar style. At the end of the 17th century, more and more jewelry decorated with diamonds began to be made.

Rings made before 1800 are very rare today. Few of them have survived, because when they ceased to be fashionable, they were most often melted down and re-formed in accordance with the patterns that were in style at that time. In the 18th century, the so-called giardinetto, which means garden in Italian. It was described in this way due to the openwork pattern representing a bouquet, basket or vase filled with flowers. To create this type of ornaments, gemstones of various colors were used. In the period of classicism, rings decorated with a small cameo were extremely popular, with a motif of a woman's head inspired by antiquity. 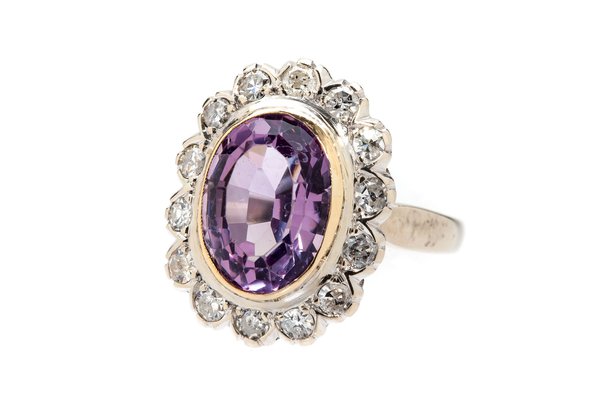 Amethyst and diamond ring end of the 20th Century 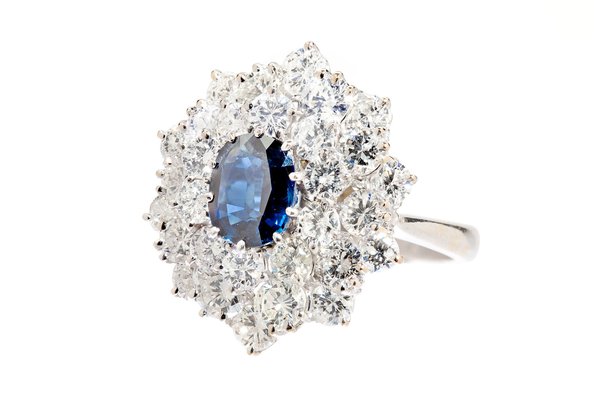 Sapphire and diamond cluster ring 2nd half of the 20th Century

The beginning of the 19th century brought a trend for two types of rings - a wedding ring and a ring studded with several stones. As a rule, the larger central gem was surrounded by smaller stones or pearls. Initially, goldsmiths used closed frames, glued with colored foil, which was to deepen the color and glow of the gem. Then, in the 1830s, souvenir jewelry of sentimental significance appeared. Dedication rings, symbols of friendship and love, became very popular.

One of the most fashionable motifs used in rings in the mid-nineteenth century was the snake - a symbol of wisdom and eternity. It became especially popular after Prince Albert presented Queen Victoria in 1839 with a 'serpent' engagement ring decorated with emeralds. This type of ornament consisted of a spiral forming two or three rings with one or two snake heads. They were often set with diamonds or rubies imitating eyes, and included an engraving or enamel imitating snake's scales. At that time, mourning rings in the form of a gold wedding ring decorated with black enamel were also eagerly worn. A belt with a buckle was a fashionable decorative motif in contemporary jewelery, also used in rings. Around 1875, the so-called gypsy rings, worn by both women and men came into fashion. They had the form of a golden wedding ring decorated with stones embedded in such a way that their surface was flush with the surface of the metal. 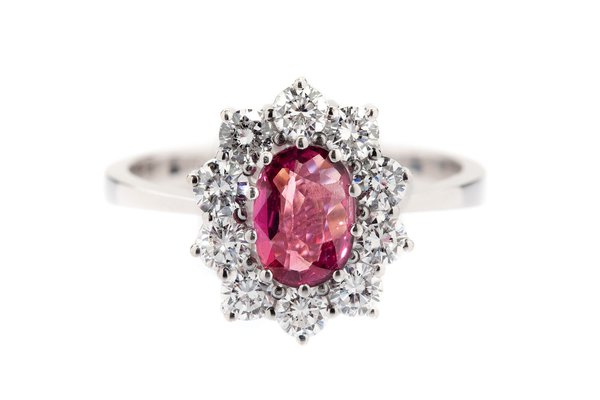 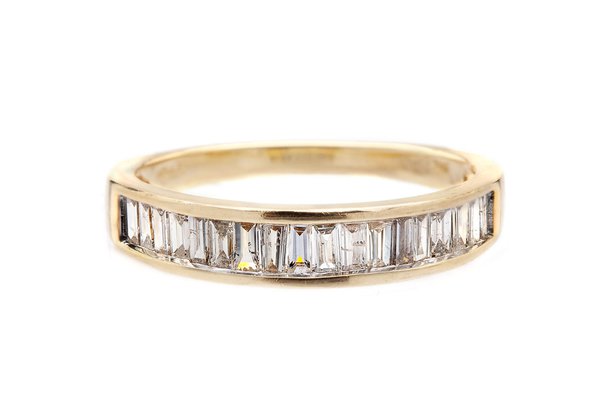 In the 1890s, new ring designs reflected an Edwardian return to court styles from the 18th century. Jewelry from that time was characterized by the production of exceptionally delicate precious stones. The motif of a heart studded with colored jewels and diamonds was very fashionable. Marquise rings, usually decorated with diamonds of various sizes, are typical for the late 19th century.

At the turn of the 19th and 20th centuries, the art of jewelery was dominated by the Art Nouveau style. Jewelry took forms that imitated nature. Colorful precious stones, silver, colored enamel, mother-of-pearl, tortoiseshell, ivory and pearls were willingly used. At the same time, Edwardian-style jewelery, inspired by Marie Antoinette jewels and court jewelery from the 18th century, became popular.

Platinum became the dominant material in jewelery at the beginning of the 20th century. The high melting point of this metal allowed for its free formation. Platinum was mainly used to create rings.

In the 1920s and 1930s, the art deco style prevailed in jewelry. It was characterized by geometrization, symmetry, simplicity and elegance. New geometric cuts of stones were used - square, triangle, baguette or trapezoid. To this day, art deco jewelry is one of the best-selling on the antiquarian market.

Jewellery. Masterpieces of Art of 19th and 20th Century

Amethyst and diamond ring
end of the 20th Century

Aquamarine and diamond ring
around the middle of the 20th Century