A Record year on the polish art market

For the first time, the Polish auction house was ranked 8th among the largest auction houses in Europe and as high as 13th among auction houses in the world. The turnover of the Polish art market in 2020 reached a record-breaking total of over 380 million. It was nearly 30 percent higher than in 2019. Last year had also seen the most spectacular record-breaking auctions. Wojciech Fangor's work "M22" was sold for over PLN 7.3 million, becoming the most expensive painting sold in Poland. 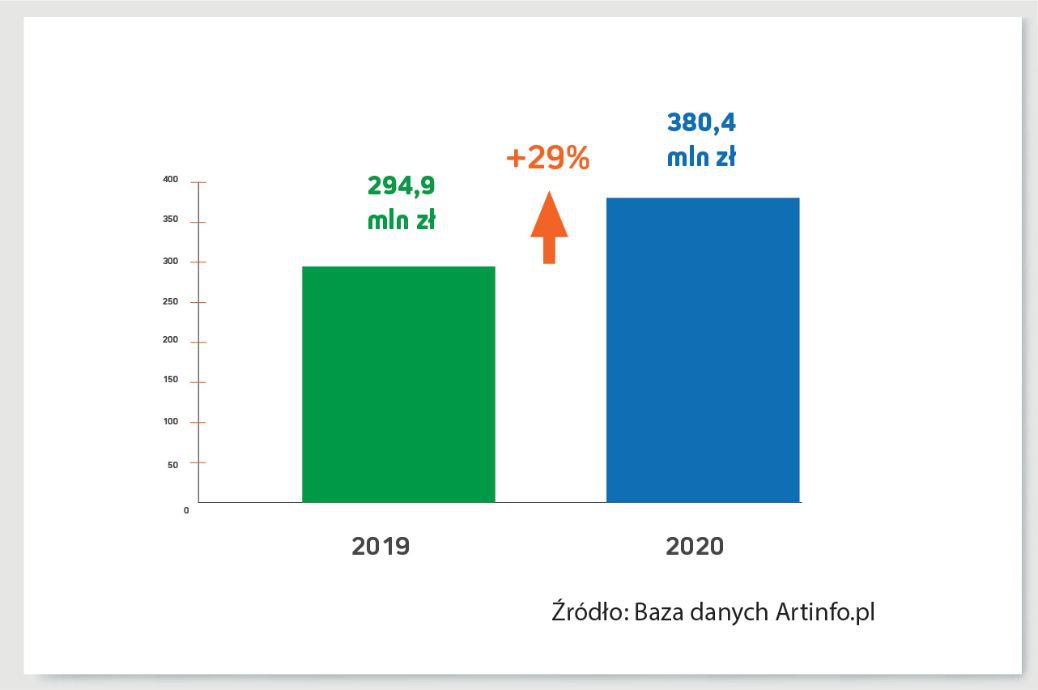 The art market proved to be immune to the crisis related to the pandemic like no other, and the investment in works of art was seen as a safe investment of capital. 2020 was a record-breaking year for the Polish art market. For the first time, the turnover on the market amounted to over PLN 380 million. In 2019, it was PLN 295 million. The DESA Unicum auction house remained the leader, generating 51.6% of the total auction turnover on the Polish art market (PLN 196.3 million). The second place is occupied by Polswiss Art with a result of 18.3% (PLN 69.7 million), the third place is Agra-Art - 9.6% (PLN 35.6 million). Only one auction house - DESA Unicum - generated nearly ⅓ of the turnover of the entire art market in Poland in 2019 in less than the last 3 months of the year. A year ago, DESA Unicum was ranked 9th in the ranking of the largest auction houses in Europe according to a report by the New York-based company Artnet. This year it was promoted to the 8th position. It surpassed the largest institutions of this type from Germany - Kunsthaus Lempertz, Switzerland - Koller Auktionen and Denmark - Bruun Rasmussen Auctioneers. In the report of one of the most important institutions researching the art market, Artprice.com, DESA Unicum ranks 13th among the largest auction houses in the world. It is also a leader in Central and Eastern Europe. 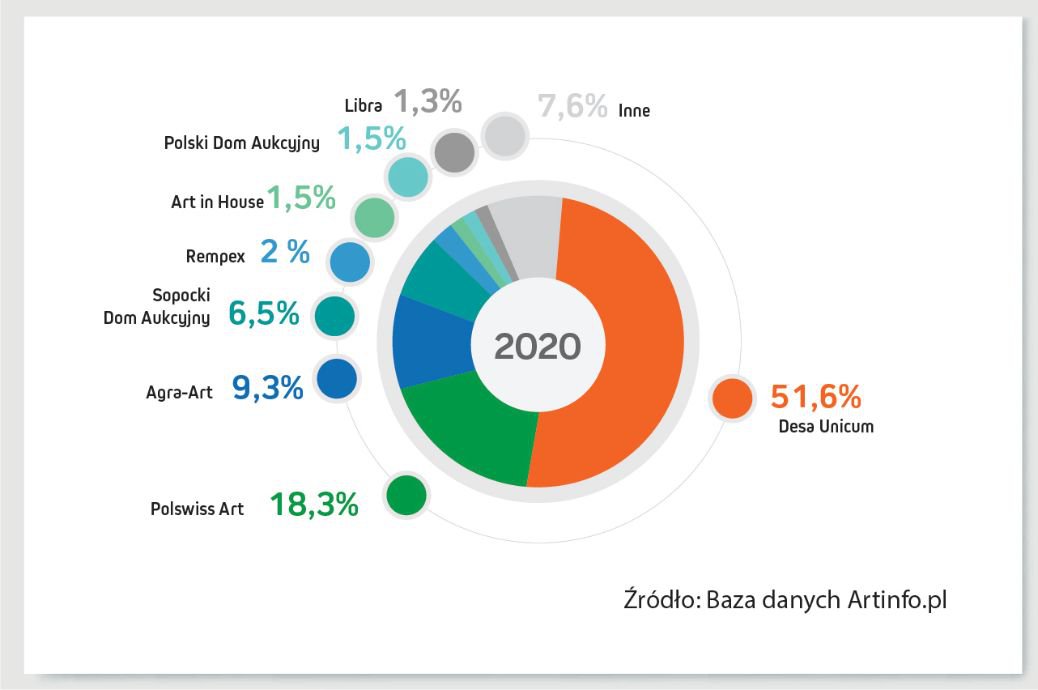 A record number of auctions was organized in Poland - 467. That's 130 more than a year ago. 21,942 objects were sold during the auctions, 4,650 more than in 2019. There were also 59 auctions recording a sale of works for over PLN 1 000 000. This is 10 more than last year. Auction records were also broken, such as the aforementioned sale of the painting "M22" by Wojciech Fangor. Nearly 4.5 million zlotys were paid for the work of Tamara Łempicka, which became the most expensive work of a painter in Poland. As well as the photo "Afghan Girl" by Steve McCurry sold for over 283 thousand making it the most expensive photo auctioned off in Poland. 50 crown ducats of Sigismund III Vasa from 1621 sold for PLN 2.8 million. This is a record-breaking amount paid for a coin in Poland. An interesting event on the Polish art market was the auction of souvenirs after Władysław Szpilman. Nearly PLN 1.3 million was paid for a Steinway piano belonging to this outstanding pianist. It is also broke the record for the most expensive musical instrument sold at an auction in Poland. The total turnover of over PLN 2.5 million made the auction a record-breaking auction of memorabilia in Poland. 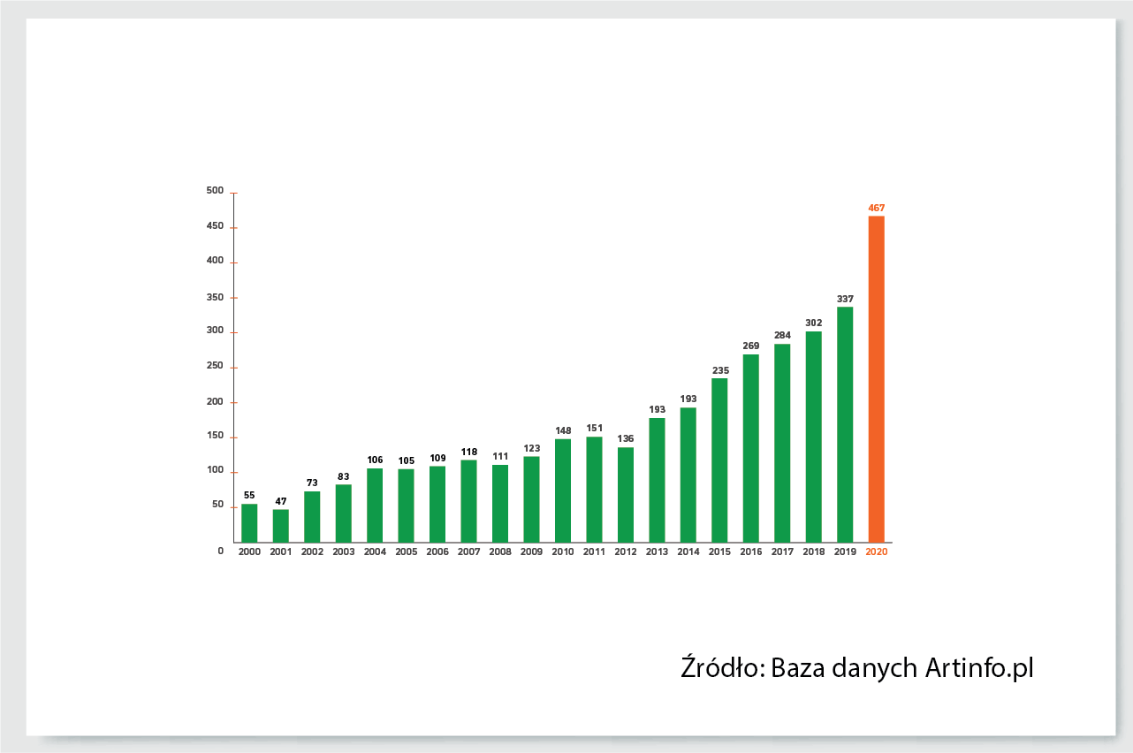 - In one year, the turnover on the art market increased by PLN 85 million. A dozen or so years ago, this was the yearly turnover. This shows how strong the market is now and how far we have come - says Rafał Kamecki, president of Artinfo.pl, an independent art market portal that prepares annual performance summaries for the domestic market.

In 2020, the online auction segment developed very strongly. The trend of moving auctions to the internet began in earnest with the outbreak of the pandemic, early last year. Their great advantage is their diversity. In 2020, online auctions were held, incl. graphics, crafts, icons, design, comics, illustrations, photography, sculpture or poster. It was the poster that set interesting records. For example, the work of Wiktor Górka "Peace to the nations, defeat of fascism" estimated at 3,000 PLN sold for over 23 thousand. The leader was DESA Unicum, which organized over 60 such auctions.

- This year was completely special. As expected by experts and conclusions from previous crises, art has turned out to be one of the safest investment tools. In 2020, as DESA Unicum, we generated a turnover of nearly PLN 200 million, i.e. over 30% more than a year ago. In 2019, the entire art market in Poland was worth less than PLN 300 million. This shows how dynamically this segment has developed. We planned to organize about 100 auctions, in the end we held over 150 of them - comments Juliusz Windorbski, CEO of DESA Unicum.

When it comes to the structure of the market, contemporary art holds the leading position once again. The most expensive contemporary work was Wojciech Fangor's "M22", which sold for PLN 7.3 million and became the most valuable painting in the country. The art market in Poland is one of the most important segments of alternative investments and is also one of the most dynamically developing ones in Europe. Last year saw trends for the 1980s in art, post-1989 artists who are already making an international career. The sculpture segment is also developing dynamically. The record price was achieved by Igor Mitoraj's "Ikaria", selling for PLN 2.7 million . This is the most expensive work of this artist in the world. While, Magdalena Abakanowicz's weaving work was sold for a record-breaking over half a million zlotys and initiated a new category of auctions on the art market in Poland.