Provenance
Literature
More information
‘Self-portrait in Polish noblemanʼs dress’ is one of the earliest works by Gottlieb. The context surrounding the painting creation remains only a presumption. The painting is considered to have been created in 1874, at Matejkoʼs atelier at the Fine Arts Academy. That period brought intensive work to the young painter, his first depictions of history: ‘Cavaliers asking King Sigismund August for protection from Cesar Ferdinand’ and ‘Prince Albert of Prussia receiving investiture from Sigismund I the Oldʼ. According to Jerzy Malinowski, both paintings were heavily influenced by Matejkoʼs ‘Stefan Batory at Pskov’ and ‘Union of Lublin (“Maurycy Gottlieb’ by Jerzy Malinowski, Warsaw 1997, page 11). Simultaneously, Gottlieb dedicates his time to painting portraits: he creates a series of oils which were later on presented during the studentsʼ exhibition. And that is how Gottliebʼs exhibition debut was reviewed in ‘Time’ by Lucjan Siemienski: ‘(...) Mr. Gottliebʼs brush seems to hit with full on force. His talent has already been recognised but perhaps it is too early for him to copy Matejkoʼs significant creations. They are certainly worth emulating, but an emulation might become a habit if it starts too early’ (‘Time’, 1874, no 169, July 27th, page 2). Had ‘Self-portrait in Polish nobleman's dress’ been presented during that exhibition? There is no way of confirming it. However, a strong, Matejko-like spirit is clearly present. Gottlieb depicts himself frontally; from the waist up. He presents the main features of his face: big, dark eyes, protruding lips, arched eyebrows. The side-eyed look manifests as him not being fully present. The physiognomy of a young, Jewish boy is strictly contrasting with the Polish period dress. As Moses Waldman, the painterʼs monographer wrote, wrote: ‘Gottlieb painted himself dressed in fabulous clothing - that of a nobleman's’ (Moses Waldman: Maurycy Gottlieb 1856-1879. Artistic autobiography, Krakow 1932, page 15). ‘Gottlieb depicted himself dressed in a Polish attire, with a solid belt, his hand resting on the karabela sabre, a gloomy sky in the background. Ha has a delia coat wrapped around his arms; the golden chain buckle is fully on display, contrasting with the dark background’ (Zofia Soltysowa, ‘The Artwork of Maurycy Gottlieb’, ‘The Krakow Year Society’ 1976, no. 47, page 158). Gottlieb reimagines himself in a period attire but most likely it was manufactured by his contemporaries. There was a number of tailors in Galicia and in Congress Poland specialising in making period clothing. An opportunity to place an order at such speciality atelier was conditioned on the grounds of heritage and connections (we thank Mr. Wlodzimierz Kalicki for disclosing that information). In conclusion, Gottliebʼs outfit must have come either from Matejko or from someone else within his circle. Not only dressing oneself in a ‘holy’ Polish attire but also depicting oneself in one, must have been at that time seen as radical, starkly contrasting with the cultural conservatism of the era; although the 18-year old seemed to manifest his artistic ambitions in an ostentatious manner, it surely did appeal to Matejkoʼs sensibility. What certainly sets an even more dramatic tone is the sky: dim, multi-coloured, with dark, ruffled clouds. ‘Self-portrait in Polish noblemanʼs dress’ is a showcase of the artistʼs predilection for colour: dark shades are enlivened with touches of pink in the sky, the greenness of the coat, the warm undertones of his complexion, the golden belt. Going back to as far as the end of the 19th century, numerous commentators have been interpreting ‘Self-portrait in Polish noblemanʼs dress’ as the painterʼs manifestation of patriotism. That early Self-portrait could have been one of his symbolic images, in which he was trying to stress his Polish, not Jewish identity (which he in turn would express by painting strictly Jewish, or even oriental and Arabic themes). The nature of the image is definitely optimistic; today it could be interpreted as an affirmative presentation of own persona within Krakowʼs artistic circles, an artistic credo of sorts - that of a painter who is trying to deepen the Polish tradition. Gottliebʼs tendencies brought him in fact disappointment. After just one semester of studying under Matejkoʼs eye at the Fine Arts Academy in Krakow, Gottlieb is faced with anti-Semitism from one professor and from another student. Discouraged by the lack of acceptance at the academy, Gottlieb quits and returns to Vienna.
Print object card Condition Report Ask about object 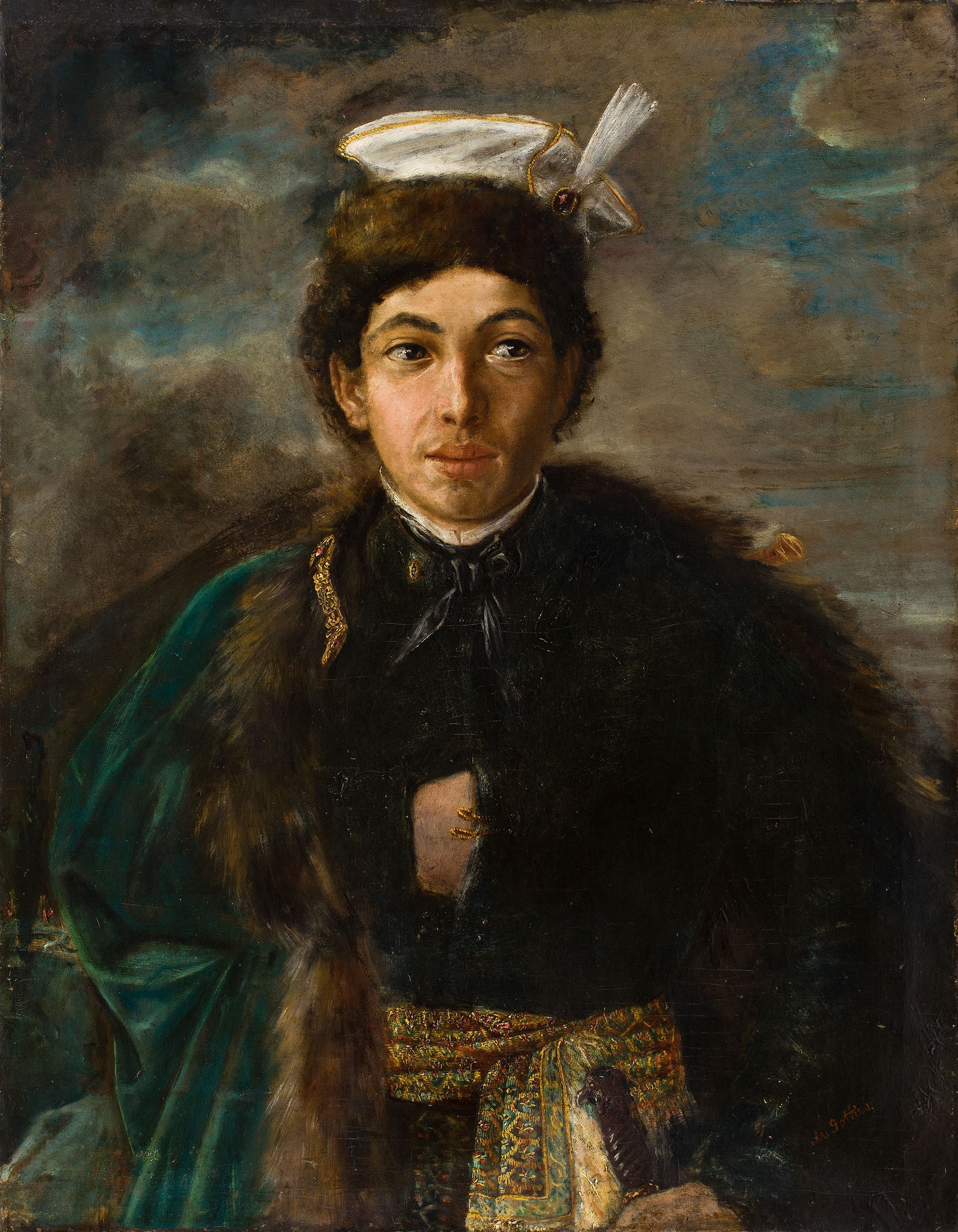